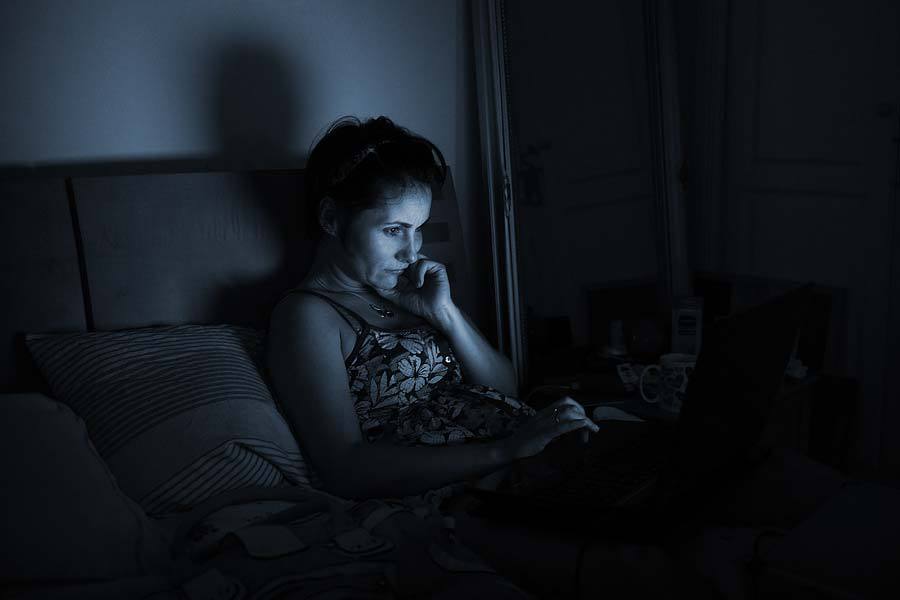 The Not-So-Bright Side of Blue Light

Prior to artificial light being created, we got the majority of our light supply from the sun and, after the sun went down, people were basically without any light. Today, the majority of people always have some kind of light to light up their evenings. We take for granted having access to these lights and often do not think about the effect that they have on our eyes.

When we use artificial light at night, however, it doesn’t come without a cost—and that cost can be more than just a monetary expense. During the night, any light that is used throws out of whack the body’s biological clock, also known as the circadian rhythm. The real downside is that studies show that side effects of exposure to blue light can be high or low blood sugar, heart trouble, being overweight, and even cancer. However, not all light colors affect us in the same way.

During the day, blue lights are good for us because they keep us attentive, help us react in a timely manner, and help keep us in good spirits. But despite how they benefit us during the day, blue lights are the worst offenders when it comes to lighting at night. Electronics with screens are rapidly being used more, and the same goes for energy-efficient lighting. The increased use of these sources of light increases the level of exposure to blue wavelengths that people get, especially after the sun goes down. Being exposed to this sort of lighting at night has been linked with a myriad of health risks.

A good deal of research has connected working the graveyard shift and being exposed to light during the night with several different kinds cancer (like breast and prostate), diabetes, heart disease, and being overweight. No one knows for sure why being exposed to light during the night is so bad for us, but what we do know is that light exposure suppresses Melatonin being produced and discharged in our bodies. Melatonin is a hormone that affects circadian rhythms, and there is some preliminary research suggesting that lower levels of Melatonin could explain how the use of light during the night has a connection to cancer. Even if a light is dim, it can affect a person’s circadian rhythm and the production and discharge of Melatonin in a person’s body.

We’ve Got The Blues

While any type of light can lower the product level of Melatonin, blue during the night does so at a much higher rate. Harvard researchers conducted a study comparing the effects of green light to the effects of blue light. The blue light lowered the production and distribution of Melatonin for two times as long as the green light and altered circadian rhythms by twice as much (three hours in comparison to an hour-and-a-half).

The university of Toronto later studied the effects of bright light on people wearing goggles that blocked blue versus a control group of people without goggles. Their results suggested that people that work graveyard shifts and people that like to stay up late or all night could protect their eyes if they purchase and wear goggles that block blue light. However, these goggles do block out other colors, so they should not be used inside during the night. If a person wants goggles that only block out blue light, they could have to pay as much as $80 for specialty equipment.

What Can You Do?

If you’re concerned about the side effects of blue light, consider using red light due to the fact that it is the color of light that suppresses Melatonin levels the least and has the less of an effect on circadian rhythms than other wavelengths. Don’t look at any form of bright screen three hours prior to going to bed. For those of you that work during the night, consider using goggles that block out blue light. Finally, be sure to expose yourself to bright light during the day, as this will allow you to sleep better at night and stay more alert during the daytime.

With the ubiquitous use of electronic devices that emit blue light these days, this is a problem that we can’t afford to not act on. If you follow these guidelines, however, exposure to blue light can be helpful rather than an issue for you. You may notice that you’ll sleep better at night and feel more awake during the day.